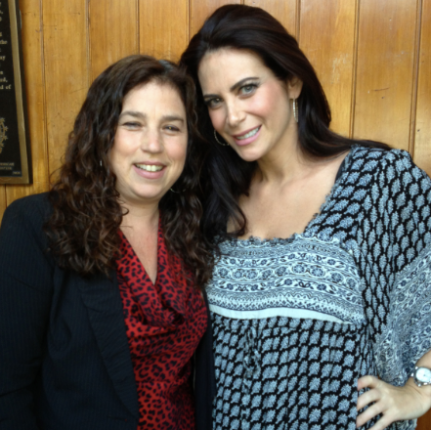 I went to a Divamoms.com event at the Water Club in NYC last week and it was so NOT suburban! Everyone didn’t look like each other, funny? Right? In the suburbs everyone in the same town kinda looks the same, same type of style, same hair, same cars, same weight, you know what I mean. At the event no two woman looked the same, I couldn’t even begin to place where everyone was from.

This breakfast event was called for MomMoguls and it featured a panel of around 7 or 8 women, who were MomMoguls or Mompreneures and they all represented different businesses. The emcee was Kelly Bensimon of NY Housewives fame. The event was run by Lyss Stern, the most Divalyssiouses Mom. Panelist present were; Haute Hippie creator, Bonnie Marcus, stylish stationary, Rosie Pope of short lived bravo show and a thriving maternity clothing biz, she had her newborn on her lap (her 4th),Elenis of Elenis.com cookies and my favorite Samantha Yanks editor in chief of Hamptons Magazine. By the way, Samantha is not my favorite ’cause I love the Hamptons, but because, she happened to be an extremely real, engaging speaker. I enjoyed listing to her take on being a woman in business and a mom. After the event I introduced myself and the event photog took our pic (where is that pic now, I wonder?) Well, I guess I have all summer in the Hamptons to track her down!

Then I introduced myself to Lyss, who by the way said numerous times, how women should help other women succeed in business. It was one of the greatest things I had ever heard, since my days at MTV when the women worked hard to beat each other into the ground. With that, I had my intern, Alison take a picture of my new hero and me!

I’d like to thank my friend Stacey for giving me the heads up on this great unsuburban gathering!

This entry was posted in Life Business. Bookmark the permalink.